We took these photos just before bath time tonight when I realised I didn’t have any photos from the week. Come into the hallway where the best light is, said Michael, after I snapped a blurry one of Felix at the dining room table. Both photos feature Michael’s new toy, lego TARDIS. Both children are entranced. Antonia is not really allowed to play with it, but I noticed she was being very quiet and when I went to check on her she was sitting up to the table, making the little lego Dr Who figures climb up and down the TARDIS stairs.

This weekend was considerably better than last weekend, but I am STILL SICK with sinus pain, headache, a nasty sore throat, and a low grade fever. I am somewhat fed up and steeling myself to get some writing done this week despite feeling groggy. I managed to take the kids swimming on Saturday morning which they enjoyed. Antonia was happy to wear her floaties around her arms (like Felix does) but refused to go in her ring. She did manage to swim around for a little while on her own with the floaties on, even twisting in a circle, before getting a mouthful of water and needing assistance. After her nap we went to the local shopping centre and had a coffee, bought some photo frames and a few groceries. Felix found the shopping cart shaped like a car and was gracious enough to let Antonia sit in it, when I warned him that was not negotiable. The only problem was trying to get her out of it, later.

Today some friends came over in the afternoon, and my achievement for the day was this black forest inspired chocolate sponge cake, with cream, cherries, and cream mixed with chocolate. I used this recipe for the sponge and it was delicious.

Now it’s nine o’clock and I’m going to bed, to see if an early night can help me kick this thing. Good night! 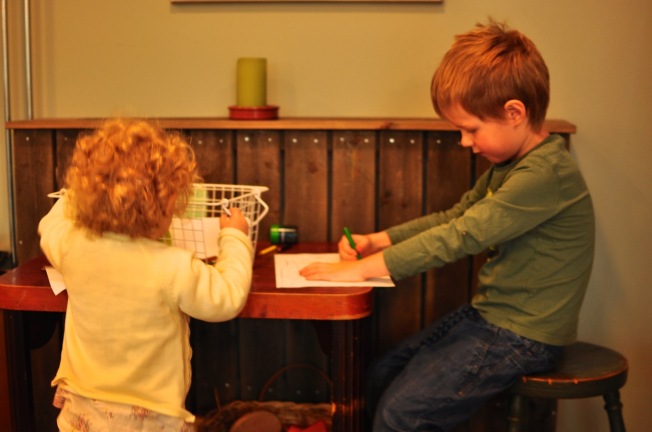 Not a week I’m in a hurry to repeat, coloured by upsetting news from far away, ferocious colds and slushy snow. We’ve all had colds but Antonia and I have been the worst hit. Managed to take the kids out to the cafe yesterday which was the highlight of Felix’s day. He drew two Thomas the tank engines, complete with smiley faces and yellow number 1s, and a more abstract looking drawing which he said represented a ladder falling apart. I didn’t get time to aim for better photos as they both wanted to commandeer the camera. Felix took the one below of me drawing a ‘wow wow’ for Antonia. Looking at the photos on the camera, Antonia pointed out ‘Tonya’ and ‘Bebix’ for the first time. I was so proud.